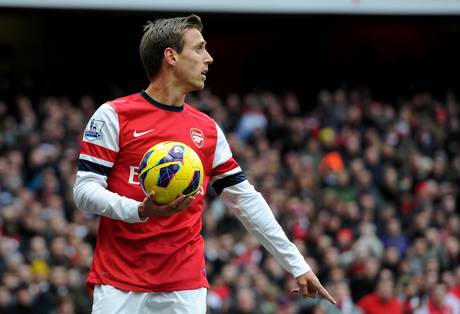 Nacho Monreal joined Arsenal on January’s Deadline Day for a fee of £8.7m, a move Wenger saw necessary after Kieran Gibbs sustained an injury that would keep him out for 4-6 weeks. And with recent news that Santos is off on loan for the remainder of the season, albeit with Arsenal covering most his wages, it shows that Wenger, like the fans, have very little if any faith in Santos to do the job during the busiest time of the year.

Monreal has played two games since joining the Gunners, the first after just one training session. But nonetheless, he has been part of an Arsenal defence that has managed to keep two clean sheets in a row. The first time in 2 months.

The man who is yet to concede a goal as an Arsenal player, told The Sun: “I’m asked to defend well and not so much to score goals.

“When I go forward and assist others, it is as if I have scored, so that is a great satisfaction for me.

“I am a committed person and so give 100 per cent in every game.

“That is the best attribute a footballer can have: that every Saturday you give everything you have for your team.”

Adding: “I cannot complain about my career but I would like to win a trophy – and I hope I can do this with Arsenal.”

The left-back is set to start his third game against Blackburn. He’ll be unable to face Bayern Munich due to being cup-tied, therefore there is no chance of him needing, or getting a rest, in the FA Cup fifth round clash which will be vital to win: for the confidence, for the season, and for the chance of a trophy that he and everyone else so badly desires.